Only a few years ago, fairs used to be the place to present novelties and visions at. Automotive exhibitions were some of the most recognized events of that kind. All the traditional car manufacturers of the world took the chance to display their newest concepts and products in an exclusive atmosphere. Golden times. Today, things have changed. Fairs are not the stage for our individual carriages anymore. And the car manufacturer Citroen presents something that can hardly be called a car. It rather is a revolution: The Citroën Ami. 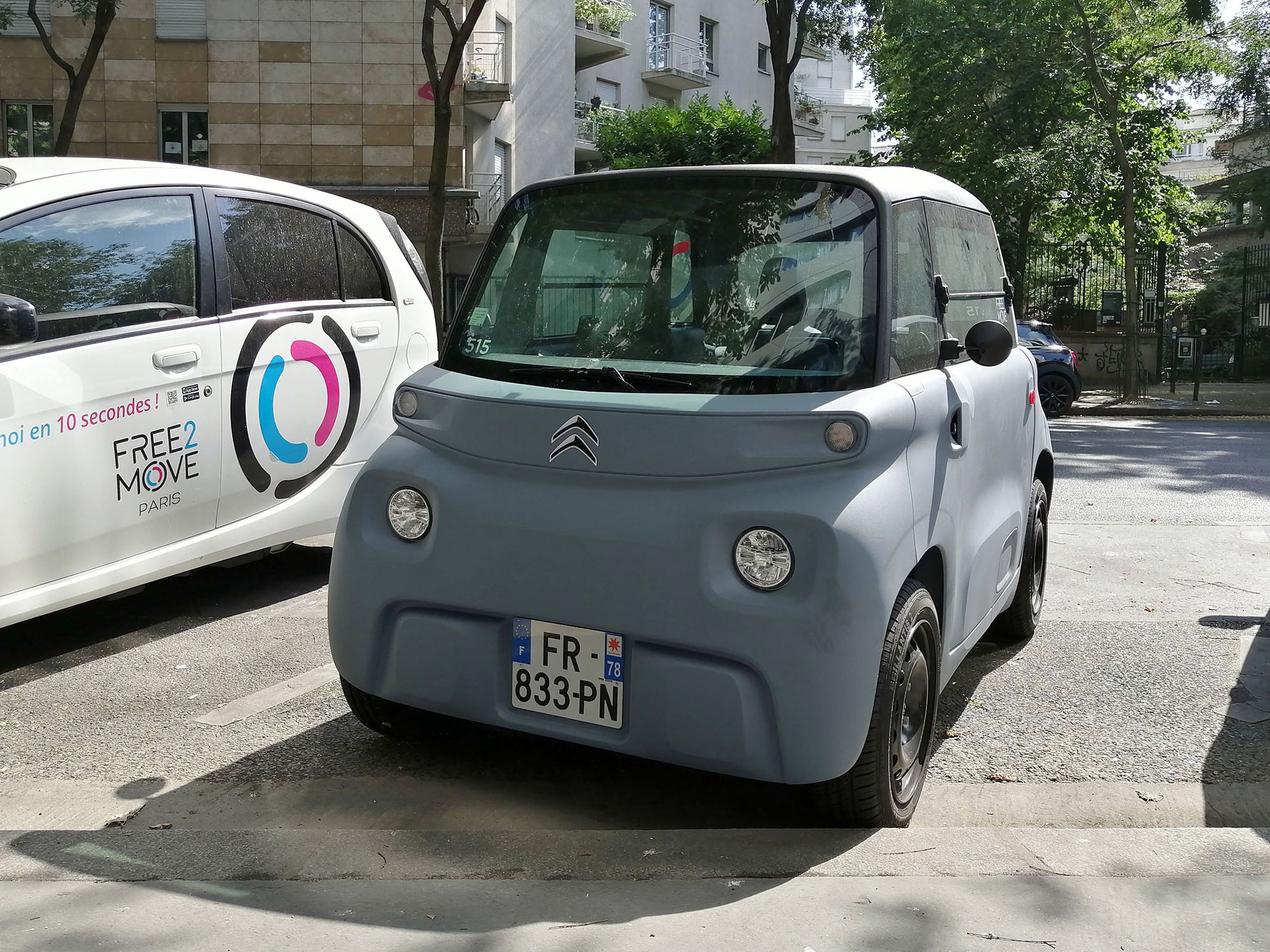 The Citroën Ami is a new sort of vehicle (picture: Wikimedia)

The old days of car manufacturing are over

It has been a typical scenery in the outgoing days of automotive fairs: Manufacturers presenting their “electric cars”. Indeed, they were just what their name tells: Electrified individual vehicles. Often, those cars were just to be identified as electrically powered by the letter “e” in the type label or some green decors attached to their conventional body. Seldomly, they were real novelties, constructed on their very own platform, optimized for their requirements. But always, the proposals offered by the car manufacturers were cars – the kind of vehicles that have their origin in classical carriages, being equipped with an engine. The kind of vehicles that often are a sort of private fortresses, occupying a lot of space but mostly just transporting one or two people for rather small distances – at least in urban environments.

Against the background of climate change and the dynamic developments in our western societies, those classical cars with their electric engine do not seem to be the appropriate solution for a modern future in urban areas.


A liberal kind of mobility

The Citroën Ami (French for “friend”) is different from those still quite traditional electric cars. It is a different concept of mobility for urban areas. With dimensions of 2.41 length and a width of only 1.39 m, it is significantly smaller. It has just two seats as in by far most cases, the five seats of traditional cars are not required. The car, which is of course fully electric, has a maximum range of 70 km which is enough for most rides in urban structures. The maximum speed is 45 km/h, which is also appropriate. The car can be loaded at home and the loading process takes about three hours, high speed loaders are already planned.
The Ami aims to fill the gap between a car and public transportation. It is not as comfortable as a car, but more private than a bus or train. The price also indicated its standing in between the common categories. With either a retail price of about 7.000 € or a rental price on the level of street scooters, the Ami liberates private transportation and makes it affordable for many people, not a few. It also enlarges the group of car drivers as it can be driven by people of 16 years age (in some countries even 14 years) even without a license. 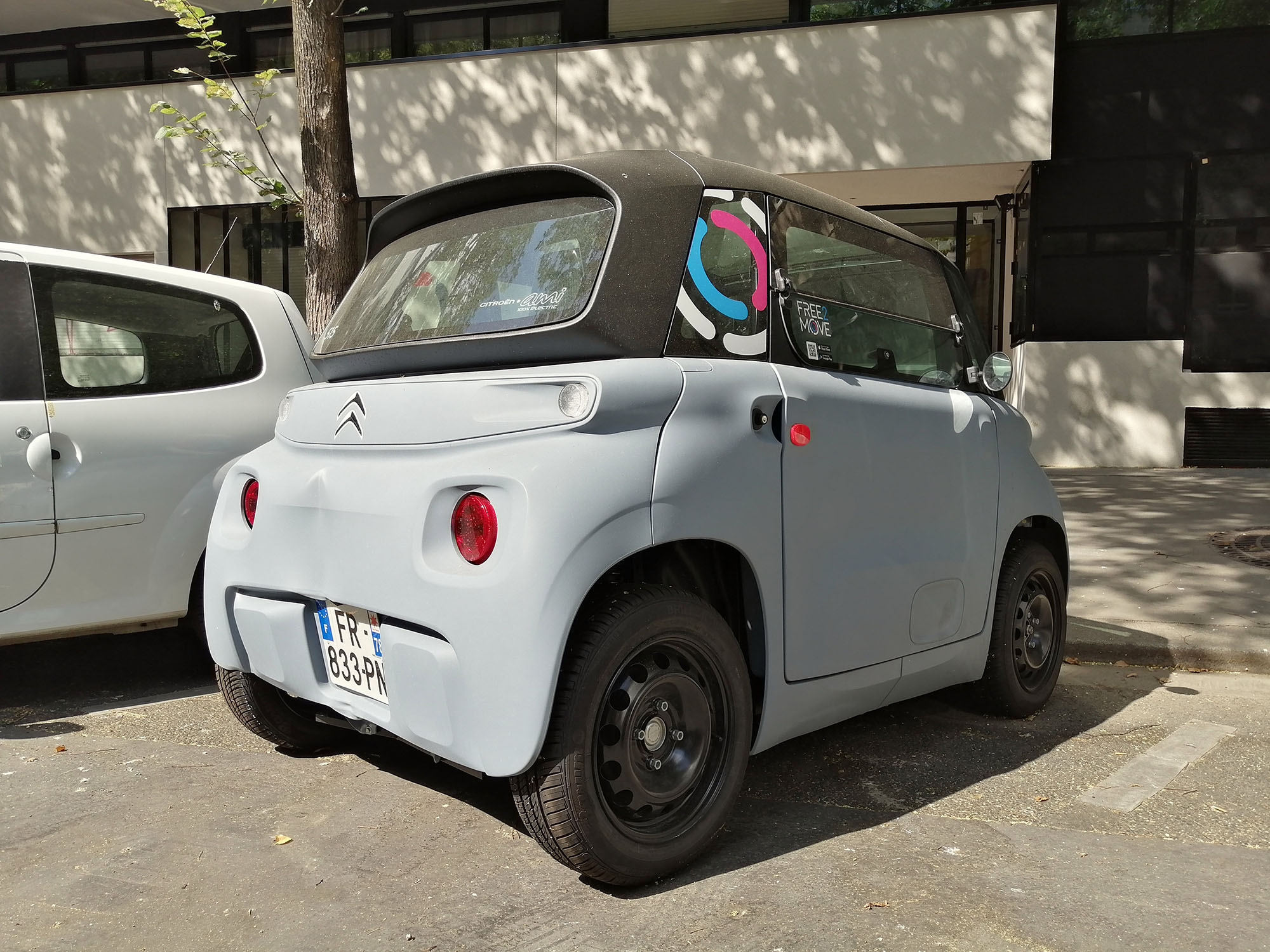 The construction of the Ami is based on identical parts (picture: Wikimedia)

For the Ami, a new chassis platform was developed by Citroën. The whole construction is optimized for its use case as a reasonably priced urban transportation vehicle. This begins with the overall dimensions and also applies to the design of the parts. The car is symmetrically constructed. This means that the car uses identical parts. The front chassis, for example is identically with the rear chassis, the left door opens to the front and is the same part like the right door that opens to the rear. This construction principle helps to save a lot of costs due to the missing need of manufacturing two different metal pressing tools. Designwise, it leads to a strictly symmetrical geometry. It presents the designers with the challenge of giving the car a visual direction as this indication is not automatically given due to the geometrical shape of the body. The Ami solves this by extending the side window panel in the rear so a hood results only in the front.

The interior provides enough comfort for short to medium distance rides. 2 passengers sit next to each other, the drivers seat was moved slightly to the front – to save width. The materials are robust and practical, there is no luxury in this car, e.g. no decadent entertainment system. But the car is of course digitally connected – by the drivers smartphone that is mounted in a prominently placed slot on the dashboard. The car is still not that austere. The Ami is progressive when it comes to individualization. Colorful panels and stickers can be attached to the car to make it a unique personal product.


“The design of Ami is a product design, not an automotive design.”
Pierre Leclercq, Head of Citroën Design

To see the Ami as a product was the overall philosophy when developing the Ami. “Disruptive projects are always the best projects. These are usually the ones that really drive the automotive world forward, and it is a tradition at Citroën to want to contribute to changing this automotive landscape. The design of Ami is a product design, not an automotive design.” , says Pierre Leclercq, Head of Citroën Design.

By emphasizing the difference of developing a product instead of a car, Leclercq openly expresses what has been a conflict for decades and at the same time explains the root of the Ami´s otherness. Whereas car designers are experts in aesthetic and sculpting car bodies, product designers face tasks differently – strategically. Product design always asks open questions and sets the user in the center of the discussion. In this case, the question asked was about traffic. It was not predetermined to solve the problem with a car. Therefore the solution is no typical car. It is a mobility device named Citroën Ami. Consequently, the Ami gets delivered right to the apartment door of its driver, just like a product ordered in an online shop.

As progressive as the Citroën Ami is, it looks unfamiliar in the streets. This is of course due to the dimensions but it is as well due to its chassis design. It seems like the car designers at Citroëns development center could not completely forget about car design conventions. The curved form of the body around the headlights and backlights seems like a reminiscence to the earlier days when cars were gelled by hand. The surface has a bumpy appeal. Sleak might have fit better to the futuristic concept. It is a pity that the Ami dilutes its progressive message with its slightly backward-facing outer appearance. It is even pittier when taking into account that Citroën has presented a concept car three years earlier that had a way more futuristic appeal: The Ami One concept. 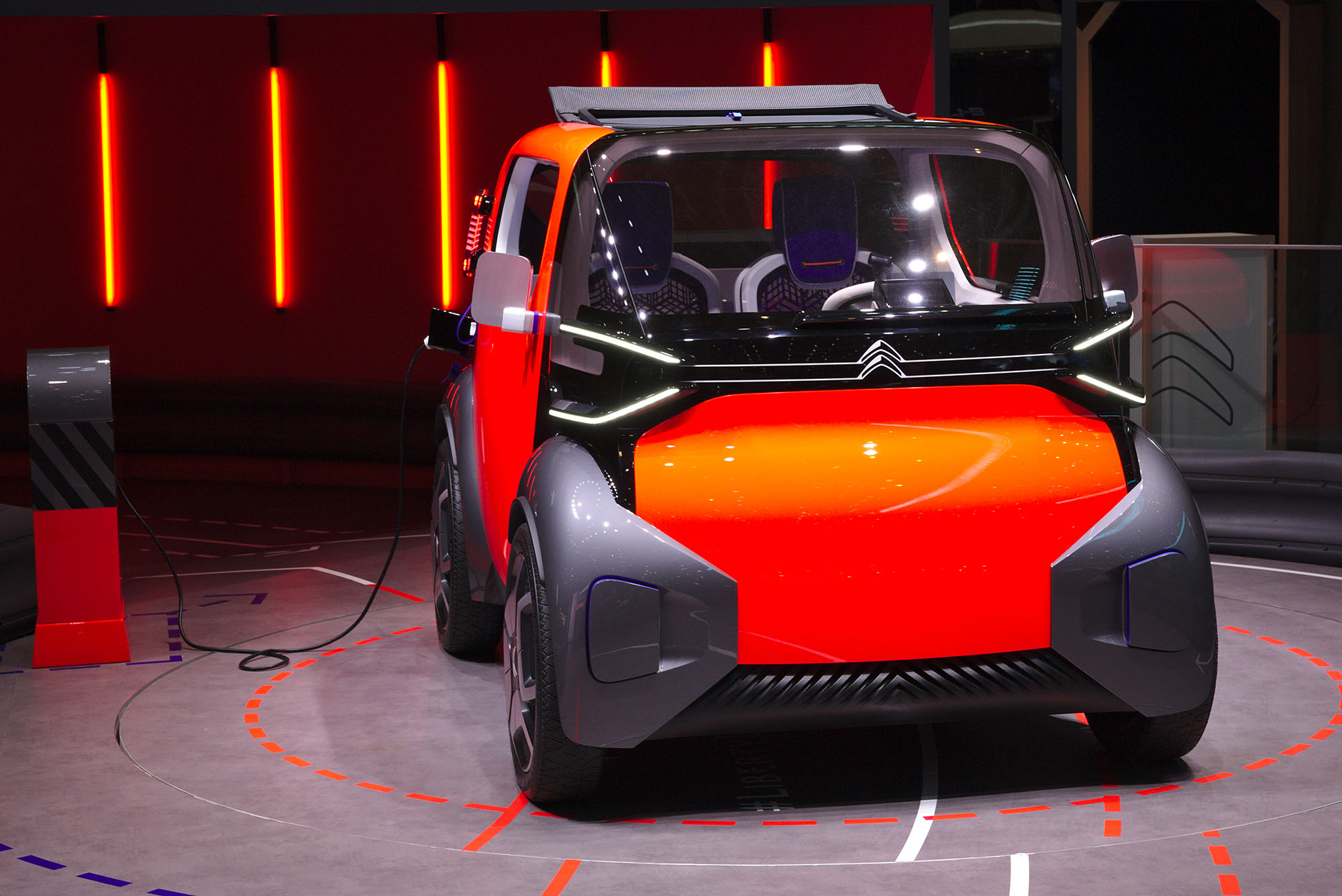 The solution was already there

As usual, Citroën´s concept car from 2017 looked more uncompromising than the latter serial car. But in this case, the cars have almost nothing in common when it comes to aesthetics. The concept car looked clean and cool whereas the serial car tries to imitate a type of earlier cars that it is not associated with in any way. The concept car Ami One is the much better representant of Citroën´s vision for future transport than the Ami serial car. A consequent application of a much more modern design language would have helped communicating the statement of this new kind of vehicle appropriately.

Still, the Citroën Ami serial car is a promising concept for the future of urban transport and the solution of infrastructural problems in densely populated areas. It is just an early representant of a new category of private vehicles. The Ami and other possibly up-to-come vehicles might lead to a paradigm shift in car manufacturing and Citroën is hopefully just one manufacturer facing our present problems with future solutions. Thank you, Citroën, for an important step to a friendly mobility culture!